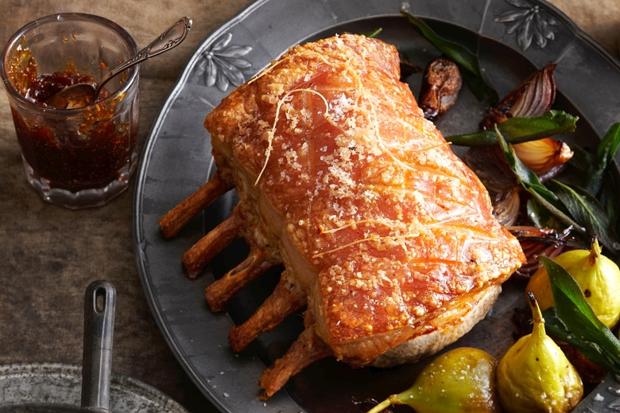 1 Put the ham in a pot with a lid and cover with cold water. If you don’t like the salty taste of ham, you can use uncured ham. However, uncured ham might have a shorter shelf life so make sure to use it soon after purchasing. Back in the pot, add the onion, celery, carrot, peppercorns, and bay leaves.

2 Bring the water to the boil, then reduce the heat to a simmer and cook for 20 minutes per 450g. Drain halfway through and replace with fresh boiling water, if you are worried it may be too salty.

3 Drain and let the ham cool until you can comfortably touch the meat. Meanwhile, preheat the oven to 190C/fan 170C /gas 5.

4 Using your hands, peel the rind and outside layer of fat off the joint. It should tear off fairly easily, leaving you with an even (but not too deep) layer of fat. Score this fat with a sharp knife in a criss-cross pattern, avoiding cutting the meat. Stud each point where the lines cross (within reason) with a clove. Or stick the cloves in the middle of the squares.

5 Mix the mustard powder and sugar together well so they form a powdery rub, then smother it on to the fat.

6 Put the joint on a baking tray lined with foil (to help when washing up) and pop it in the oven for 30–40 minutes, basting it regularly.

7 Remove the ham from the oven when it’s golden; don’t let it burn. Keep it warm and let it rest for 15-30 minutes before carving.

1 Preheat the oven to 180C/fan 160C/gas 4. Take the garlic clove and rub it around the base and sides of a shallow ovenproof gratin dish (about 15cm square is perfect). This gives lovely garlicky flavour without being too overwhelming.

2 Slice the potatoes into 1cm slices. Toss in a bowl with a splash of oil and the sage and season with salt and pepper.

3 Butter the gratin dish, then add the potato slices, overlapping them neatly on the top layer.

4 Cover with foil and bake in the oven for 30 minutes. Now remove the foil and pour the cream over so that the sweet potato is just covered. Bake for a further 30 minutes until golden on top, checking regularly so that it does not scorch or dry out. Season with pepper if you like, then leave the gratin to rest and firm up a little for 15 minutes before serving.

1 Preheat the oven to its highest setting. Put the fat/oil in a large, heavy-based roasting tin and place in the oven.

2 Fill a large saucepan (one that has a lid) with water, put it on a high heat and bring to the boil.

3 Peel the potatoes and cut them. The size is up to you, whatever you think of as roast potato-sized. The only rule is that they should all be a similar size, so they cook at the same rate.

4 Add some salt to the water in the pan and, once the water starts to boil, carefully slide the potatoes in so the water doesn’t splash on you. Return to the boil, then simmer the potatoes for 5-7 minutes. The outsides should become soft, but the centre will remain hard.

5 Drain the potatoes, put them back in the saucepan (off the heat) and cover for 5 minutes, until the potatoes turn white and floury-looking. Once this happens, sprinkle in the flour or polenta, if using. Flour will give them a crisper crust; polenta will render them explosively crunchy.

6 Hold the handle of the pan with one hand and the lid with the other. Shake the pan so the potatoes get bashed about, roughing them up a bit, which means they will be crisper once they are roasted.

7 Remove the roasting tin from the oven and put it on the hob over a medium heat. The fat should be incredibly hot now. Put the potatoes in the tin very carefully with a spoon, so they don’t spit too much. Once they’re in, baste them properly so they are all completely covered in fat/oil.

8 Return to the top shelf of the oven, close the door and don’t bother them for about 40 minutes, apart from turning them over at the roughly halfway point. Take them out of the oven – they should be perfectly golden all over – and sprinkle with salt.

1 With a sharp knife, prick the chicken all over. Mix the yoghurt, curry paste, lemon juice and salt to taste in a bowl. Rub the marinade all over the chicken, as well as under the skin of the breast. Put on a plate, cover and place in the fridge to marinate; overnight would be perfect.

2 Take the chicken out of the fridge and return it to room temperature while you preheat the oven to 200 C/gas mark 6.

3 Place the chicken in a roasting tin and cover with foil. Cook in the oven for 20 minutes per 500g, plus 20 minutes more. Halfway through, baste the chicken with any remaining marinade. When the chicken has cooked for two-thirds of the total time, remove the foil so the chicken can brown.

4 If you’re making the spiced yogurt, combine all the ingredients in a bowl and mix.

5 Once the chicken has finished cooking, remove it from the oven and pull a leg away from the body. Skewer it here; the juices should run clear. If you see any trace of pink, put it back in the oven for another five minutes and then check again. Repeat if necessary. The skin should be darkly burnished from the curry paste.

Boneless leg of pork, about 1kg
Salt and pepper
Glug of olive oil
2 onions, sliced
To serve
Roast potatoes (above)
Goodness gravy! (below)

1 Take the pork out of the fridge about an hour before cooking, so it can come to room temperature (this is important when cooking any meat). Preheat the oven to 220C/fan 200C/gas 7.

2 Season the flesh of the pork with salt and pepper and rub in some olive oil, avoiding the rind. If the rind isn’t scored, or the score marks are a bit far apart, score it yourself with a sharp knife (a Stanley knife is good), cutting diagonal lines about 1cm apart. Pat the rind with kitchen paper to get it as dry as possible; you want your crackling to crackle. Rub some salt into the rind, especially into the score marks. Add pepper, too, if you like peppery crackling.

3 Layer the onion slices in a roasting tin. Put the pork on top – skin-side up – making sure it covers all the onions so they don’t burn.

5 Remove the pork from the oven. Now you can choose to leave the crackling in place or to remove it with a knife. Careful, it’s hot! Cover the pork meat in foil and leave it to rest on a large plate. If the crackling needs further crisping, then flatten it out and finish it under a hot grill, watching closely to make sure it doesn’t burn. Skim the juices of excess fat and use them to make the Goodness gravy! (see below).

6 Serve the pork and crackling with roast potatoes (see above), lashings of Goodness gravy! and some wilted spinach, lightly cooked cabbage or other greens.

Ingredients
The juices and root vegetables from under a roast
3 tsp plain flour
Small glass of wine, cider or port, depending on the meat
1 litre hot stock
Optional extras
Mustard
Anchovies
Redcurrant jelly

1 When roasting your meat (such as roast pork), cook it on a bed of vegetables. Onion, carrot and celery are good. These will be used later in your gravy.

2 Take the meat out of the roasting tin and cover it loosely with foil, so that it rests and keeps warm.

3 Remove as much fat (which is the clear liquid that floats to the surface) from the roasting tin as possible by tipping the tin away from you and use a soup spoon to ladle up the fat.

4 Place the tin with its vegetables and the meat juices over a medium heat on the hob and stir in the flour. Using a fork, mash up the vegetables. It won’t look much like gravy at the moment. Now add the alcohol bring to a simmer for a minute, so the booze burns off.

5 Add the stock to the gravy and return it to the boil. Keep scraping the bottom of the roasting tin with a wooden spoon to incorporate all the crunchy bits of flavour. Reduce the heat and simmer for 10 minutes. By now it should be looking more like gravy.

6 Strain the liquid through a sieve into a saucepan, using the wooden spoon to press as much of the vegetable goodness through as possible.

7 There’s your gravy. Add a dollop of mustard/an anchovy/some redcurrant jelly if you fancy.