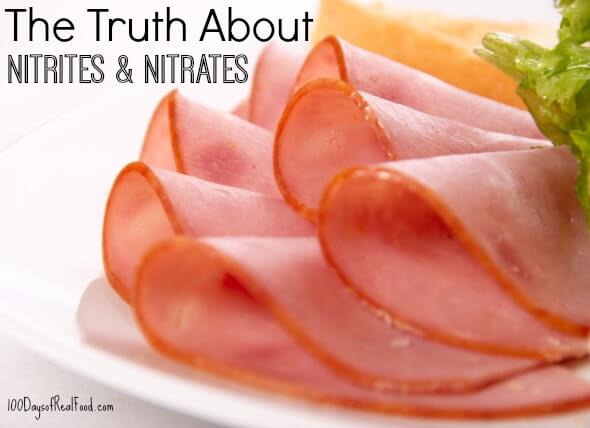 Long before I’d even given processed food or real food a thought, I’d heard about the supposed dangers of nitrites and nitrates. You’re probably nodding your head in agreement (especially if you’ve been pregnant and told to avoid lunch meat). But really, how many of us actually know what a nitrate or nitrite is and exactly why it’s something we should avoid in the first place? And to make matters even more confusing, who knows what the difference is between an added nitrite/nitrate and a naturally occurring one and why the difference matters?

These questions have long been asked on my blog whenever I talk about our occasional consumption of organic lunch meat, bacon, hot dogs, etc. So I’m super excited to dive head first into this confusing topic in today’s sponsored post with Applegate.

First of all though, I want to make one thing clear. Yes, Applegate is my sponsor (i.e., they help financially support this blog and the team that runs it so it can remain completely and 100% free to you), and yes, I’ve agreed to write two blog posts this year that are sponsored by them. BUT, they asked me what I wanted to write about in these posts. So, even though I am being compensated, I have free creative control here, and frankly (don’t tell them this), I’d write a post just like this regardless of whether they were involved!

That’s the beauty of the majority of the sponsors we work with. We make it a goal to connect with companies I would talk about (or use products from) whether or not they were helping to keep our lights on. Alright, now that I’ve cleared the air on that, let’s dive in…

Now, what’s interesting is that before Applegate got good at using the naturally-occuring nitrates, I learned they actually didn’t use any at all. And what that meant was grayish-looking hot dogs that obviously weren’t too appealing and therefore didn’t sell very well. As I shared last year, I actually used to buy bacon from our farmers’ market that had nothing added, was not cured, and also was not smoked. What we ended up with was basically just plain pork, which tastes quite different from what I know as bacon. So while meat products can be done without any nitrates at all, they may be hard to find and you also might not end up with the taste and appearance you were expecting.

So with that, I think I’ll happily stick to Applegate’s common sense philosophy of cured meat products being an occasional food at our house (probably on average of about once a month). Because thankfully, I have access to many different tasty organic (and grass-fed) options that are naturally cured!

Where do you stand?