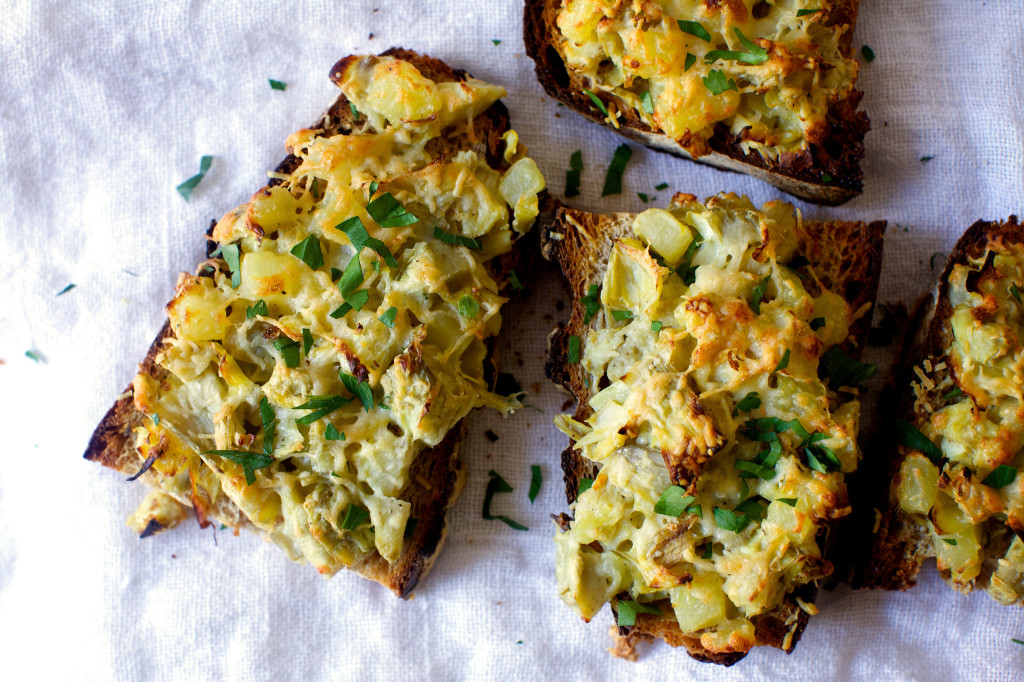 As someone who claims that her favorite food on earth is artichokes, it’s strange that this cooking website boasts so few recipes that feature them, that the last one was over 5 years ago, and I came to the conclusion years later that I liked it better without the artichokes. Something is not adding up. But while I like to believe that I cook what I want — it’s all about me, me, me, baby — and not solely that which will please a real or imagined audience, the reality is that it’s not much fun to make food that few people get as excited about as you do. It would be like inviting everyone you knew to a viewing party on the latest Science Channel documentary on, say, how rolling luggage is made only to find that all of your friends were simultaneously, apologetically busy that night. (WTH, you want us to return to the dark ages of lifting luggage by hand?) 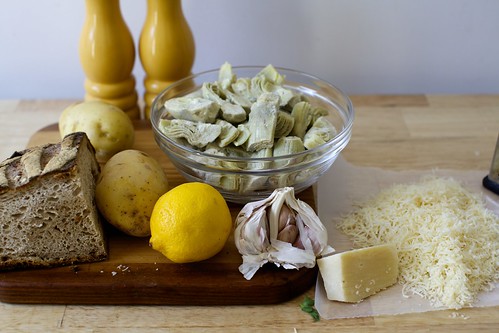 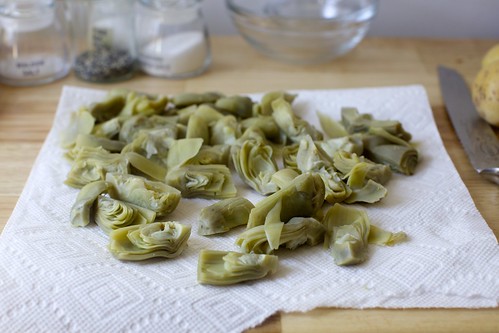 When it comes to artichokes, most people are divided into a few camps: those that do not like them and are wrong (uh, in my opinion) and those that have tasted their delicious magnificence for what it is. But, even in the pro-artichoke camp, very few people have the patience required for all of the pesky trimming, paring, thorns and fuzzy chokes of preparing them for a relatively small yield of heart for the price. Sure, you can buy prepared artichokes, either oil-packed in jars or brine-packed in cans, but neither taste like much more to me than their respectively slick/tinny confines. 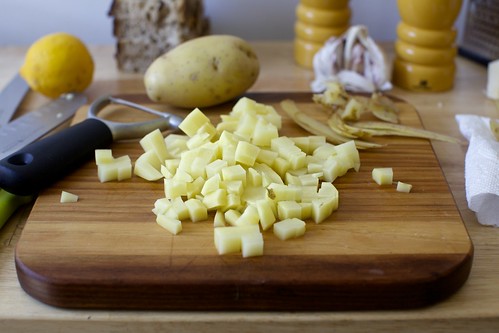 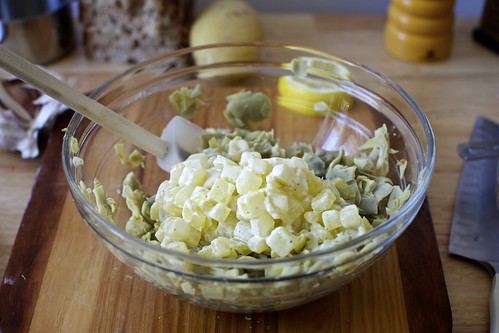 And, then there are frozen. A few years ago, I discovered that Trader Joes, appropriately for a California company, carries absolutely stunning frozen artichoke hearts and have been doing my best since then to find ways to use them. Two weeks ago, I dusted off this ancient recipe for a potato-artichoke gratin but used frozen artichokes instead of fresh and am here to say that it was superlative, amazing enough that I vowed to have more artichokes and gratin-ed potatoes in my life. Of course, a deep bubbling gratin of heavy cream, crisp-edged potatoes and excesses of sharp, melted cheese is not my weeknight reality, much as I wish it were. Things you can put on bread and pass off as dinner, however? Now we’re talking. 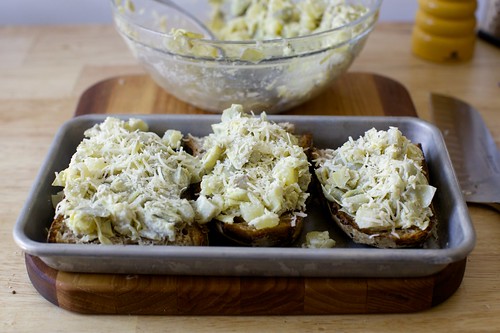 And so I pared the recipe down to its essence — lemony artichokes nestled against garlicky creamed potatoes with sharp cheese — reversed the proportion of potatoes to artichokes so that it’s mostly the latter, limited the cream, and heaped this all on whole-grain sourdough bread, broiling it until we had the most glorious of open-faced grilled cheese sandwiches and I’m sorry if this site goes dark for a while after this, but once you’ve found the only thing you want to eat for the next hereafter, there’s very little reason to stray. I’m sure you’ll understand once you try them. 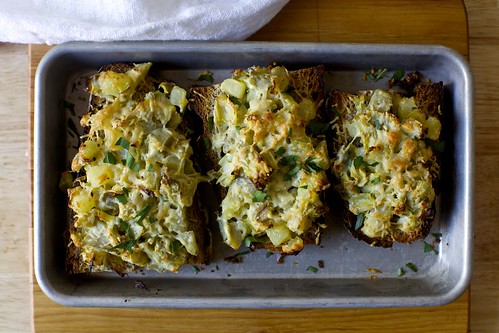 And for the other side of the world:
Six Months Ago: Fall-Toush Salad
1.5 Years Ago: Purple Plum Torte
2.5 Years Ago: Cumin Seed Roasted Cauliflower with Yogurt
3.5 Years Ago: Pancetta, White Bean and Swiss Chard Pot Pies

If you have the patience for it, fresh artichoke hearts would be unquestionably wonderful here and I will include instructions (shortly!) for how to prep them below. As I mentioned above, canned artichoke hearts aren’t my favorite (they always taste a little metallic to me), but I suspect that well-rinsed and patted very, very dry, they might work well here as a replacement. I’ve chosen frozen artichokes here, however, because I find their taste to be the most authentic, and they cannot be easier to use. I buy mine at Trader Joe’s, but I’m sure other brands will work just fine here.

I remain obsessed with the massive whole wheat sourdough loaves that you can buy in quarters at Balthazar’s bakery on Spring Street or in Englewood, NJ or at any outlet of the Le Pain Quotidien chain, but of course any bread you enjoy eating will work well here too.

Cook frozen artichokes on the stove artichokes in simmering water until firm-tender, which took 4 to 5 minutes for the brand I used. Drain well in a colander, then spread out on layers of paper towels and do you best to press all of the water out. You can keep them on towels while you prepare the other ingredients.

Cover diced potatoes with in inch of cold water and a few pinches of salt (using the same pot as the artichokes, because doing dishes is the worst) and set a timer for 8 minutes. Bring to a simmer and cook until potatoes are tender but not falling apart, usually about the allotted 8 minutes but go by texture, not timer. Drain potatoes, wipe out pot, and put cream, garlic, lemon zest, salt and pepper back in. Bring to a simmer and cook for one minute, stirring because this will be a tiny amount in a bigger pot. Add drained potatoes and cook together for 1 to 2 minutes more.

Chop drained and patted dry artichokes into bite-sized (about 1/2-inch) chunks and place in a large bowl. Season with salt and lemon juice to taste. Add potato-cream mixture and 3/4 cup grated cheese and stir to combine. Taste for seasoning and adjust salt and pepper if needed (will probably be needed). Add up to 2 extra tablespoons heavy cream if the mixture seems a little dry.

Heat the broiler on your oven, or simply your oven itself to 450°F. Arrange slices of bread on a foil-lined tray (for easy clean up) and heap artichoke-potato mixture evenly over slices. Sprinkle with reserved cheese, and bake or broil until browned and melty, anywhere from 5 minutes under a good broiler to 10 to 15 minutes in a less-intense oven. Eat hot and repeat again tomorrow.