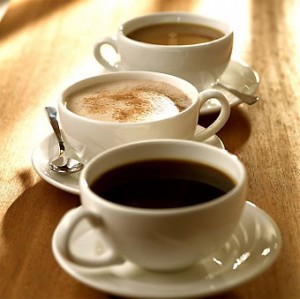 THE CONTINENTALS have got the correct coffee habit: instead of slurping from supersized American-style beverage buckets, we would get a much better kick by sipping thimblefuls through the day, a new study says.

Scientists at Chicago’s Rush University report how they created an experiment that sounds like one of Big Brother’s crueller stunts to find if a big morning mug of coffee is more invigorating than drinking regular little espresso-sized doses.

They report, in the journal Sleep, that they shut 16 men in windowless rooms for 29 days, so they had no idea how time was passing. The scientists then got them to stay awake for 42-hour stretches. Once they had got the volunteers completely tired and disorientated, they asked them to complete a series of brain-teasing tests.

The volunteers who sipped a low dose of coffee once an hour scored much better than those who slurped the same full daily amount in one go at the start of their waking cycle. They also had far fewer side-effects, such as shakes.

But if you fancy ignoring that advice, help may be on its way in the shape of the caffeine-stuffed doughnut being developed by Robert Bohannon, an American molecular scientist who also owns a caf?. He says each of his “Buzz Donuts” will contain the equivalent of a big mug of fresh brew. Dunk that in your espresso.

BABIES in danger of being born prematurely could now start life with a bang as well as a healthy whimper, thanks to nitroglycerin.

Obstetricians at Queen’s University, Ontario, claim that their nitroglycerin skin patches are the first drug therapy that both halts premature labour and improves the health chances of the baby.

Up to 8 per cent of babies are born prematurely, before 37 weeks. The figure is increasing and the problem can often cause the babies short and long-term health problems. A number of drugs are used as “tocolytic” medications, to inhibit, slow or halt the contractions of the uterus, to give the baby a chance to grow to a more viable size. But none of the drugs has a proven record of improving babies’ health and they can have side-effects.

Nitroglycerin, used in explosives, is known to improve blood flow to the uterus. The team at Queen’s University gave it in the form of skin patches to half of a group of 158 women entering premature labour.

Their study found that the women given nitroglycerin suffered significantly fewer premature births, child deaths and child disabilities than those who were given a placebo skin patch. The scientists are calling for larger studies to confirm these preliminary findings.

MEN shouldn’t need to be dragged screaming to watch chick-flicks, claims a Kansas University professor. Richard Harris says his study of dating couples found that, although before seeing a romantic film men predicted they wouldn’t like it, afterwards they rated it just as highly as their dates. The women thought the men had liked the sex scenes most, but guys cited the gushy bits as their faves. Cue happy ending.

SCIENTISTS have found a way to awaken sleeping genes, which could help to treat diseases such as cancer.

Texas University doctors report in Nature Chemical Biology that they have developed a way to use RNA, a tiny,message-carrying cousin of DNA, to consistently coax dormant genes into making vital proteins that can act, for example, to suppress the development of tumours in the body.

In tests, the team has used tailor-made strands of RNA to carry messages to a specific gene in breast cancer cells, telling it to slow their growth.

What a clever chair

A WHEELCHAIR that “reads” the minds of totally paralysed people is set to bring them a new world of mobility. Spanish scientists are building a wheelchair that can be controlled by thought, via a small, mobile brain-computer interface. Such interfaces already exist but need huge computers and are physically plugged in to the brain.

The project, backed by the Spanish Government, is now building a light computer that needs to read only relatively crude EEG brain patterns. “We plan to use non-invasive devices to record the rhythms from the surface of the skull,” says Javier Minguez, of Zaragoza University.

After a week’s training, the computer will learn individual patients’ thought patterns for directions such as “left” and “right”. A laser sensor should stop the user crashing into things. The first prototype may appear late next year.

OPERATORS who answer 999 calls may wish to consider resigning now. New York City is introducing a YouTube-type initiative in which people ringing the emergency number 911 to report accidents can send video of the injuries from their cellphones at the same time. The move may help casualty workers to prepare to treat wounds they have been shown by phone. They might get used to visiting call centres armed with strong smelling salts, too.