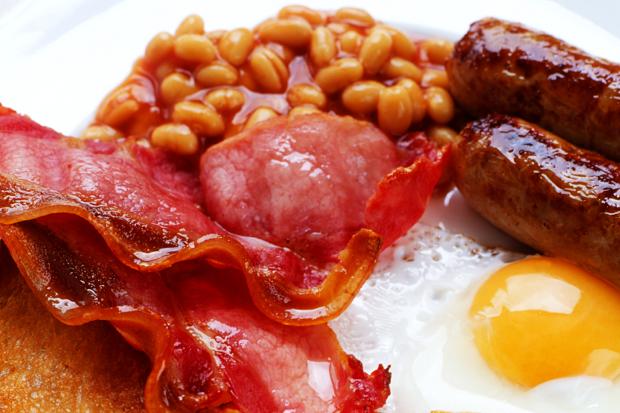 Only 40 per cent of us have breakfast each morning, and those that skip it are prone to irritability and weight gain. It’s time to go back to work on an egg, says Peta Bee

Breakfast has never seemed less fashionable. More of us than ever have sidelined the meal in an attempt to fast our way to weight loss, or as a way to increase the impact of an early-morning workout, or have simply sacrificed it as the length of our working day has expanded. Yet any sense of worthiness that comes with avoiding calories first thing in the morning may be short-lived. Nutritional therapist Miguel Toribio-Mateas has some grave news for the quarter of Britons who are currently skipping breakfast three times a week – your abstinence is making your metabolism and hormone levels go haywire. Or, as he puts it, it is making you very “hangry”.

Bypassing the breadbin and circumventing cereal, he says, can result in your blood sugar levels becoming dangerously low, which can leave you feeling flat and unable to concentrate. “Your blood sugar stores get depleted overnight and eating something will bring them back to normal,” Toribio-Mateas says. “On the other hand, if you head out to work without eating, daily anxieties combine with sugar depletion to leave you cranky and anxious. You become ‘Hangry’ — hungry and angry rolled into one.”

So could breakfast be due for a renaissance? For years there have been conflicting schools of thought about the health merits of the first meal of the day, and it has drifted in and out of popularity as, first, followers of the GI Diet stocked up on their daily porridge, then Atkins devotees gorged on bacon, while more recently cardio-fasters such Madonna have advocated avoiding it altogether, in order to coerce your metabolism to burn body fat when you exercise with the early birds.

Now, the case in favour of the morning meal seems to be gaining traction, both for adults and children. Last month, a study of nearly 27,000 males showed that those who reported regularly missing breakfast had a 27 per cent higher risk of heart attack or death from coronary heart disease. Meanwhile, Boris Johnson, the Mayor of London, was helping to launch breakfast clubs for 5,000 children in London’s most deprived boroughs, who it is said are missing out on valuable brain nutrients by going to school without having eaten.

For those concerned about their waistlines, perhaps the most compelling evidence in favour of breakfast was announced last week by Tel Aviv University researchers, who found that all calories may not be equal, and those consumed early in the day are more easily expended. Their study was based on the idea that a meal’s timing affects the body’s circadian rhythm, which is closely linked to metabolism. Over 12 weeks, overweight women were given either a substantial breakfast (700 calories), then lunch (500) and dinner (200), or the reverse quantities (ie, a 200-calorie breakfast, a 500-calorie lunch and a 700-calorie dinner). Both groups lost weight, but the big-breakfast eaters experienced a weight loss that was almost two-and-a-half times greater (19 pounds versus eight). That’s not all. Eating more calories at breakfast, as opposed to other mealtimes, led to a 33 per cent drop in risky blood fats and a greater loss of waistline inches and better blood sugar levels in the big-breakfast group than in the smaller breakfast group.

In theory, eating a large meal late in the day could disrupt the circadian clock and lead to pounds gained. (A separate study found that men who ate late at night had a 55 per cent higher risk of coronary disease.) It has also been shown that the body burns significantly more calories to digest, absorb and process a morning meal than it does an afternoon or evening meal.

“When and where we eat has changed dramatically in the past two decades,” Toribio-Mateas says. “Timings of meals can never be black and white, but if you are busy and prone to stress, breakfast is definitely a good thing. Missing breakfast has profound effects on metabolic and hormonal levels, not least because you’re ‘driving on empty’.”

Over the years several studies gave examined the link between breakfast and mood and most have reached the same conclusion: starting the day on empty tends to have a definite, if slight, effect on mood and memory. One significant study a few years ago saw British researchers ask 144 healthy subjects to fast overnight and then eat breakfast, only coffee or nothing the following morning. They found that the non-eaters had the highest levels of fatigue and irritability at noon, four hours after they woke. They and the caffeine-only group fared worse on tests of mental skills than breakfast eaters.

Those who still can’t face the idea of a big breakfast in the morning might prefer the findings of a study by nutritionists at Cardiff University, who recently discovered that dividing breakfast into four portions, eaten an hour apart, has powerful effects on brainpower. Verbal reasoning and problem-solving ability apparently improved roughly 35 per cent among those who practised breakfast grazing in this way, which the nutritionists reasoned was thanks to a more consistent supply of blood glucose to the brain.

What of the claim by breakfast avoiders that their habit of sticking to black coffee helps them to put off eating until midday; that if they eat first thing they can’t stop? Dr Sarah Schenker, of the British Dietetic Association (BDA), says the evidence is mostly anecdotal. Even so, it does no harm to skip breakfast occasionally, she says. “It is often said that eating breakfast kick-starts the body’s metabolism, in other words bringing it from a fasted state to a fed state; but with our increased culture of snacking and grazing between meals, this is not as important as it once was.

“While you may not need to eat as soon as you wake, your priority is to take on some fluid as hydration levels will have dipped overnight.”

So what is the perfect start to the day? When it comes to the meal itself, carb-dominant breakfasts in the form of cereals, bagels or toast are out. Some wholegrains are OK, but studies have shown that it is the addition of protein to breakfast that slows digestion and promotes a feeling of fullness throughout the morning. “Protein will ensure your calorie count doesn’t get out of control and can help in controlling appetite between meals,” Schenker says. We are not talking whey-protein smoothies here – solid foods seem to curb appetite better than protein-rich drinks. “Be realistic about your day ahead,” she adds. “A quiet day in the office doesn’t warrant a huge meal first thing but, in general, a decent breakfast sets you up perfectly for the day.”

Good choices, Schenker says, are smoked salmon, lean meats, oily fish and nuts added to yoghurt and fruit. Yet perhaps the best thing you can eat for breakfast is an egg. Once demonised as bad for the heart, eggs are now firmly positioned as a health food. Whereas a three-egg a week upper limit was once the official recommendation, there is now a green light to eat as many as we like. “There is no upper limit,” says Helen Bond of the BDA. “Eggs are considered healthy, and even the British Heart Foundation has lifted limits accordingly.” When the Department of Health released findings of an analysis looking at their nutritional content, they found today’s eggs are healthier than those produced 30 years ago because of a change in the feed given to chickens. Although yolks are smaller, eggs now contain 70 per cent more vitamin D and double the amount of selenium, levels of which are low in the UK diet.

Not only does each egg yolk provide 13 essential nutrients (egg whites contain albumen, which is an important source of protein, but no fat) including the B vitamin group which is needed for vital functions in the body, an egg can also help you lose weight. In a review of six studies over eight years in the journal Network Health Dietitian, British dietitian Dr Carrie Ruxton found egg breakfasts were the most hunger-quelling. Meanwhile, US scientists recently found that among people given either an egg or cereals, each providing the same number of calories, those eating the eggs felt fuller, were less inclined to snack on fatty foods and consumed fewer calories overall in the following 24 hours. It’s partly down to their protein content but eggs also trigger changes in appetite-related gut hormones, which leads to a feeling of fullness.

So go to work on an egg. It will make you feel fuller and, Toribio-Mateas says, it will make you happier. “Breakfast sends positive messages to the brain, telling it your body is set up in a good way for the day ahead,” he says. “When you’ve eaten it, your instinct is to make healthier choices and your hormones and metabolism respond positively. You are less likely to binge on muffins and biscuits. For most people it is a very good thing.”

(Cereal values without milk — an average serving of 150ml of semi-skimmed milk will provide 75 calories and 2.6 grams of fat while the same amount of whole milk provides 99 calories and 5.25grams of fat.)