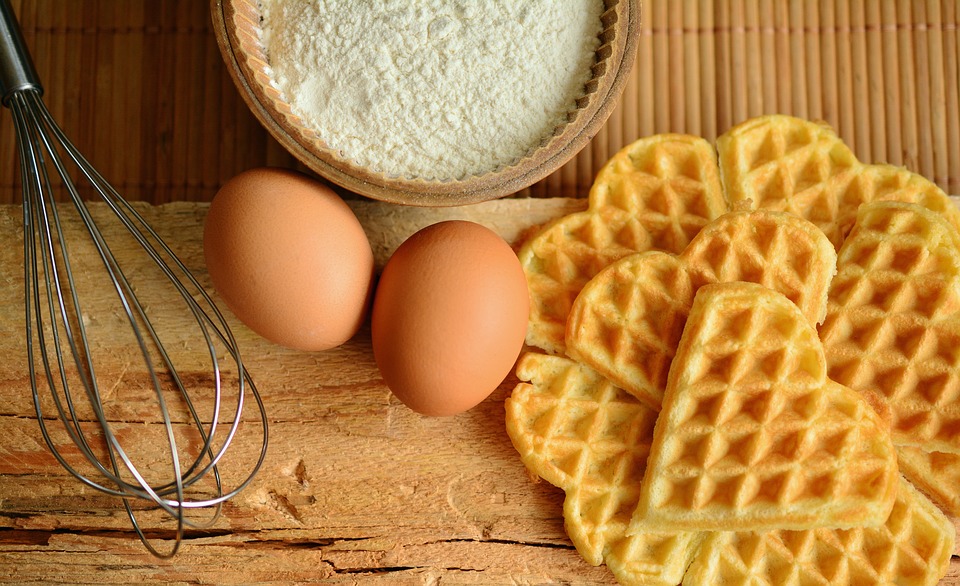 Okay, so before any Belgian waffle recipe purists (if there is such a thing) bite my head off about this not perhaps being a fully traditional Belgian waffle recipe, I should perhaps come out with the fact that I played around with the ingredients a bit, tweaking things to match the taste exactly to my personal liking. The original recipe is great, but I found that adding a tablespoon of malted milk powder along with a little bit more sugar and an extra teaspoon of vanilla made them the perfect fit for my rather fussy taste buds. This also makes them a tad bit lighter, softer on the inside and crispy on the outside. Otherwise the ingredients which go into the original recipe include:

The ingredients list in these quantities serves 4-6 people, with a waffle yield of 6. Now this is one of the longer-cooking waffle recipes around and certainly the waffle recipe which I personally take the longest to prepare, so it’s perhaps not the best recipe for a weekday breakfast which would need to be ready ASAP.

So the waffle maker I have is one of those industrial grade ones from https://www.expondo.co.uk/catering-equipment/, with quite the range of nifty little features. One such feature is that of the iron’s non-stick property, which means I don’t really need to spray on any non-stick oil before ladling the batter. Otherwise that’s what you start off with – oiling the waffle maker.

Note: for this recipe it’s not a simple matter of just mixing in the dry ingredients and then mixing the wet ones – you’ll first have to sift all the dry ingredients using a large bowl, then using a separate bowl, separate the egg whites from your eggs and beat them using any egg-beating method, as long as the end goal is the formation of some stiff peaks. Don’t discard the egg yolks.

Next, mix together the wet ingredients which include the milk, egg yolks, vanilla and oil, stirring slightly. Now add in the dry ingredients and mix well.

Next, the egg whites should be folded in, after which time you proceed to cook the waffles using your waffle maker.

Medium-high heat will do and the batter will cook for around 5-10 minutes before the waffles are ready.

Avoid trying to cook the waffles at higher heat settings, perhaps driven by the desire to want to have them ready quicker. Preparing Belgian waffles according to this particular recipe is quite tricky in that these waffles require a longer cooking time on medium heat so that they can cook relatively evenly without having a soggy centre while the outside is crispy or even burnt. So you’ll have to be a little patient with them and let them cook for a bit. They do indeed cook very evenly, but as I mentioned in the opening of this post, playing around with some specific quantities of the ingredients list can result in a softer centre along with a crispy exterior.