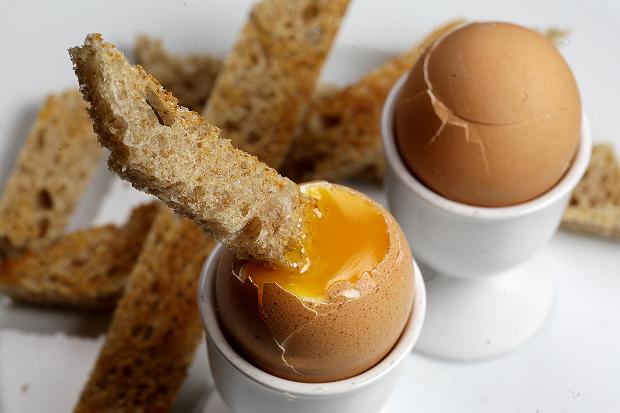 A big breakfast makes you fat, but eggs are healthy again. The latest messages on the best start to your day are mixed. We look at the options. Every Saturday morning, when the rest of Soho is rubbing its eyes from the night’s excesses, a queue of hungry Londoners forms outside a little yellow café. By mid-morning the line is 50m long, but the customers are happy to wait for The Breakfast Club’s eggs benedict and chorizo hash browns.

“I’d be disappointed if we didn’t have queues outside our three cafés at the weekend,”says the founder Jonathan Arana-Morton, who will open his fourth London café in Spitalfields this spring. “I do wonder at times why people are queuing for bacon and eggs, but before us there were only greasy spoons and coffee-chain shops.”

Arana-Morton, who’s a spinach, mango, apple and mint smoothie man in the mornings (eggs benedict on Fridays), believes that breakfast is becoming more fashionable, but says it’s always been a part of our nation’s psyche. The infamous “breakfast like a king . . .” quote is ingrained in our brains. Its originator is Adelle Davis, a 1940s American nutritionist and author who started her day with a drink of milk blended with yeast, oil, eggs, fruit and mineral supplements.

Davis’s adage may be much-cited by nutritionists, parents and people queueing for a Sunday fry-up, but a recent study questions the wisdom of a royally proportioned breakfast. The report, published last month in the Nutrition Journal, claims that big breakfasts are bad news. A team of Munich-based scientists studied the food intake of 280 obese and 100 normal-weight adults and found that a large breakfast added significantly to overall calorie intake. No surprise there, but the researchers also found that further calorie intake during the day was not influenced by the size of breakfast. In other words, the smaller the breakfast, the lower the overall daily calorie consumption, which may lead the weight-conscious to assume it’s best to skip breakfast altogether.

This contradicts the advice of nutritionists, who have long said that a healthy, good-sized breakfast will reduce calorie intake later in the day by cutting down on cravings for snacks. It also came as a blow to me. I’m a passionate, borderline fanatic, lover of breakfast, to the point of spending my spare time writing a blog about it.

But with mixed messages over what we should eat, how much should we eat, or should we eat breakfast at all, my favourite meal is in danger of becoming a chore. It used to be so simple. The lore of “the most important meal of the day” has been drummed into us by decades of breakfast propaganda from such Orwellian-sounding organisations as the Milk Marketing Board and the Breakfast Cereal Information Service. “Milk’s Gotta Lotta Bottle” or the Wheaties “breakfast of champions” campaigns are as much behind our breakfast infatuation as Davis’s mantra.

It has spawned a multimillion-pound business for the likes of Kellogg’s, Weetabix and Nestlé. The UK is the second highest consumer of breakfast cereals per capita in the world and we have an average four packs of cereal on the go (seven if you’re a family).

Yet even such slogans as “go to work on an egg” have been fraught with controversy. Eating an egg a day fell out of favour in the Nineties after reports of high cholesterol content and the unhealthy bone meal fed to hens.

A study by the US Government this month found that modern eggs contain 13 per cent less cholesterol and 64 per cent more vitamin D than a decade ago.

The nutrition consultant Ian Marber, from The Food Doctor, says too many people still eat a large breakfast made up almost entirely of carbohydrates. “Cereal, toast, it’s all carbs — cheap, quick, low calorie, but not nutritious.” He alternates a breakfast of plain yoghurt with berries and toasted seeds, with boiled or scrambled eggs. Marber picks out granola, a toasted version of muesli that is increasingly popular in the UK, as particularly onerous. “It’s all carbs and is packed with sugar.”

The Times nutritionist Amanda Ursell agrees: “Granola is hideous stuff. The calories are huge and it’s just like those ‘honey-coated cereals’. People think it’s healthy because of the oats and odd raspberry, but like those dreadful cereal bars, which can be as little as 99 calories, they send blood sugar soaring and have you craving sweet food again.”

Danish pastries too come in for a hammering. “It will mainline your system with high blood sugar, then you crash and reach for another high,” she says. Ursell, who in the mornings will eat boiled eggs or granary toast, Whole Earth peanut butter and rooibos tea, says that there is huge confusion over breakfast. She is wary of much of the pro-breakfast research endorsed by large cereal manufacturers for obvious reasons, but says breakfast is a must.

“If you skip breakfast your brain is operating at sub-optimal blood sugar levels and your short-term memory and concentration will be affected.”

Marber says that going without breakfast means surviving on adrenalin, which leaves you prone to reduced mental capacity and dipping between sugar and caffeine highs and energy lows. It can lead to disturbed sleep, he tells me over scrambled eggs and smoked salmon (hold the toast) at Café Luc, in Marylebone, leaving you tired, prone to stress and in a continuing cycle.

But the answer is not a big breakfast. “This myth of having a breakfast that keeps you going until lunch is a marketing term,” he says. “Nothing will ‘keep you going’. The answer is to have a medium-sized breakfast and a healthy snack mid-morning.” Or he suggests reversing the snack and breakfast if you can’t face eating first thing. “It’s important to eat something within 30 minutes of waking,” he says. The perfect breakfast? “You should have 25 to 30 per cent protein on the plate from such things as as nuts, eggs or yoghurt.”

The emphasis on carbs comes because we lack time and imagination in the morning. People spend just six to nine minutes on average preparing and eating breakfast most mornings and many don’t vary their weekday breakfast for months, sometimes years. It’s odd, then, that while I write about cafés and review muesli for my blog, The Muesli Lover, it’s the recipes people come back for (bircher muesli and baked porridge are my best-read blog posts). We all have aspirations for a better breakfast, but few of us act on them.

If you need inspiration, there’s a host of websites besides my own plugging the virtues of the first meal of the day. From @porridgelady on Twitter to Simply Breakfast, a compelling photo blog of beautifully shot breakfast dishes, you could say goodbye to cereal and toast for ever. I did long ago and eat home-made muesli with yoghurt and fresh fruit, French toast or an oat and berry smoothie most mornings.

To those who say that they don’t do breakfast, Ursell advises eating earlier in the evening and going to bed earlier to regulate blood sugar, stress levels and appetite. She suggests trying to eat something in the morning, however small. “A glass of fruit juice and a piece of toast will help, or a skinny cappuccino and a banana if you’re on the run.”

The irony is that the breakfast most of us regard as being the least healthy, the fry-up, is often the better option. Anna Hansen, a chef who opened the brunch outpost, The Providores, in Marylebone, ten years ago with fellow New Zealander Peter Gordon, says that her solo venture, The Modern Pantry, in Clerkenwell, serves a healthy “fry-up”. The basis of the meal is poached eggs, spinach and roasted tomatoes. Hansen, who starts her day with fresh fruit, yoghurt, oats and seeds, says: “It’s our most popular breakfast order, but it’s not a greasy affair. On top of that we have people asking for brown bread, no butter, and juice.”

Yotam Ottolenghi, whose delis and cafés throughout London are lauded for their croissants and pastries, says people are getting more adventurous and healthier in their morning choice. His preferred breakfast is fresh fruit, muesli and apple juice, but “when I don’t care, toast with herb mayonnaise, topped with ham, sliced tomato and cucumber”.

While Ursell may not endorse the mayonnaise, she applauds imagination over eating breakfast. If one choice doesn’t work, try something else, she says. “If porridge leaves you hungry mid-morning, try eggs, which are rich in protein and very satiating. For some people, soluble fibre works, for others it’s protein.”

At The Breakfast Club, the diners’ preferences are ruled by the day of the week, or even the season. At the start of the week, especially during the January health drive, it sells fruit, yogurt, bircher muesli and porridge by the bucketload. By the end of the week, pancake and bacon sandwich orders eclipse the healthy stuff. “It’s a steep downhill slope to the weekend and the hangover breakfast,” Arana-Morton says.

Comfort eating aside, breakfast is an important meal and the German study shouldn’t be interpreted as suggesting we drop the meal altogether, say experts. Ursell refers to the National Weight Control Registry in the US for evidence of the benefits of good breakfasting. The organisation monitors the diet and weight of Americans who have sustained a 30lb or more weight loss for at least a year. “The evidence is clear; people who lose weight and keep it off tend to eat breakfast. It encourages them to eat better.”

One of the best publicised studies on breakfast came out of Harvard Medical School in 2003 and found that people who ate breakfast every day were a third less likely to be obese than those who skipped it. It’s especially important for young people, who need to replenish glucose levels in the blood that have dipped in the night. Once they’ve eaten, they will feel more energised after breakfast, expend more energy and eat less junk food.

The key is having a mix of protein and carbohydrates, keeping fat, salt and sugar levels down, and controlling portion size. It’s hardly a prescription for a plate of pancakes, bacon and syrup, but it gives the green light to boiled eggs and soldiers. Breakfast of kings it may not be, but at least it’s got a touch of military grandeur.